In random order of importance

“Liking both Marvin Gaye and Art Garfunkel is like supporting both the Israelis and the Palestinians.”

“People worry about kids playing with guns, and teenagers watching violent videos; we are scared that some sort of culture of violence will take them over. Nobody worries about kids listening to thousands–literally thousands–of songs about broken hearts and rejection and pain and misery and loss. The unhappiest people I know, romantically speaking, are the ones who like pop music the most; and I don’t know whether pop music has caused this unhappiness, but I do know that they’ve been listening to the sad songs longer than they’ve been living the unhappy lives.”

“Now, the making of a good compilation tape is a very subtle art. Many do’s and don’ts. First of all, you ‘re using someone else’s poetry to express how you feel. This is a delicate thing.”

“The making of a great compilation tape, like breaking up, is hard to do. It takes ages longer than it might seem. You gotta kick it off with a killer to grab attention. Then you gotta take it up a notch. But you don’t want to blow your wad. So then you gotta cool it off a notch. There are a lot of rules.”

“Jesus. I’m glad I know nothing about psychotherapy, about Jung and Freud and that lot. If I did, I’d probably be extremely frightened by now: the woman who wants to have sex in the place where she used to go for walks with her dead dad is probably very dangerous indeed.”

“If you start out depressed, everything’s kind of a pleasant surprise”

[On choosing a career] “How many of them really know what they want, though? I mean, a lot of them think they have to know, right? But inside they don’t really know, so… I don’t know, but I know that I don’t know.”

[On a similar vein] “Nobody’s looking for a puppeteer in today’s wintry economic climate.”

“There is truth, and there are lies, and art always tells the truth. Even when it’s lying.”

“But the elderly have so much to offer, sir. they’re our link with history.”

“Consider outer space. You know, from the time of the first NASA mission, it was clear that outer space has a clear effect on the human psyche. Why, during the first Gemini mission, thought was actually given to sending up a man and a woman… together. A cosmic ‘Adam and Eve,’ if you will. Bound together by fate, situated on the most powerful rocket yet known to man. It’s giant thrusters blasting them into the dark void, as they hurtle towards their final destination: the gushing wellspring of life itself.”

“What the hell’s wrong with being stupid once in awhile? Does everything you do always have to be sensible? Haven’t you ever thrown water balloons off a roof? When you were a little kid didn’t you ever sprinkle Ivory flakes on the living room floor ’cause you wanted to make it snow in July? Didn’t you ever get really shitfaced and maybe make a complete fool of yourself and still have an excellent time?”

“The degree of civilization in a society can be judged by observing its prisoners.”  Dostoyevsky said that… after doin’ a little time. ”

“One little change has a ripple effect and it effects everything else. Like a butterfly floats its wings and Tokyo explodes or there’s a tsunami, in like, you know, somewhere.” 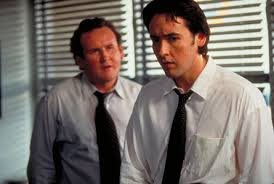 Vince wonders if this is a good time to drop in that Dostoyevsky quote. But he’s not sure how to pronounce Dostoyevsky. Neither am I.