I don’t believe in an interventionist God. That’s another thing I have in common with Nick Cave along with the appearance of a receding hairline. (Nice one, nature.) Nor do I believe in an omnipotent creator to whom we owe everything and who watches over everything; to whom we owe a duty of worship and who will reward us with eternal life in paradise, with or without virgins, or a deathtime’s supply of Reese’s Peanut Butter Cups. Consequently, I don’t believe in any of the organised religions that espouse that kind of deity. I can tell you what I don’t believe in more than what I do. I’m of no fixed faith. Except in humanity. Most of the time.

Still, that won’t ever stop me from occasionally claiming squatters rights in the back pew of an empty church seeking sanctuary from the rotation crop of head woes. Any branch of The Bank of God will do. But always the left-hand side. Force of habit from many a day-dreaming hour spent there in the company of other children in receipt of stern looks from arched browed parents threatening us with a clip round the ear if we didn’t sit up right.

I made it to fourteen before graduating to free-will. The age when being within a two mile radius of my parents became untenable due to the threat it posed to my teenage credentials. Credentials carefully crafted through back-combing, sulking and failure to cooperate with authority. I’d already lost patience with the Virgin Mary for not respecting my demands to appear to me. Or at least give me a sneaky wink from any one of the numerous ornate marble homages to her adorning the place. I gave her enough chances by taking her on in lengthy staring competitions. She always won, all the while appearing pre-occupied. Mary checking her phone for texts from Joseph. Mary looking slightly hungover. Mary taking yet another selfie etc. 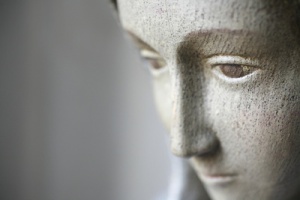 “I really shouldn’t have had that tequila”

It’s impossible to conceive of those days now. Moving statues making headlines, Corpus Christi processions snaking through the streets, the Child of Prague going on tour round the houses for a few rosary gigs. And yet, churches remain the only indoor incubator of a rare quality of stillness. One dense with generations of special intentions. Most of the time, churches don’t register on my radar, but once in a while I get swept in to one by the draw of the candlelight and the need to flee my own muddle-headedness.

So conditioned am I, my hand almost reaches out involuntarily towards the water font. The coin lands on a bed of others. I straighten the wick on a candle and light it off another. Another born of hope or gratitude. Who knows. The flame gathers steam and elbows its way into the row with confidence, chattering back and forth to its neighbours.

Lighting candles is no substitute for thinking well of those you love. But chances are, the flame outlasts the time between slipping back out onto the street and a return to other things that occupy the mind for most of the time.