It’s two years to the month since I harassed your Dad for song ideas for your naming ceremony. It was far from naming ceremonies we were reared. Every generation has the responsibility of trying to make the best of what they’re about. For my folks it was original sin and prawn cocktail. More power to them. Or less, as was the case.

In truth, it was like the wedding ceremony we never had. Your Granny’s house was treated to the same epic spruce-up it received during the last bachelor days of all her boys. I volunteered your Auntie’s fine singing voice. Every tome and tune were pored over. Noses were flung skyward at the mention of a sausage roll. And I sighed heavily every time I looked at the family portrait above the TV in which I am channelling some groovy fairway fashion with my classic diamond v-neck golfer’s jumper replete with polo-neck.

Your Dad shrugged off his own suggestion at the speed his ears could hear it. “Ah, she won’t know it, and it probably wouldn’t fit. Nevermind.”

You don’t know this about your Dad yet, but that’d be typical of the man. Never one to strenuously impose his will or wishes on others, except when demanding someone pass him the hammer so he can drive the nails in when hanging himself on the Cross. Sorry, did you think I was using you to make passive aggressive comments? I actually find his martyring quite endearing. In a I’ll-see-your-persecution-complex-and-raise-it type way. Why did you think I married him? To let him win.

A few other things you don’t know yet:

When leaving the hospital to take you home, he pressed play on the car stereo and Stevie Wonder’s Isn’t She Lovely ricocheted off our hearts. The fucker.

Every payday he squirrels away savings into a Credit Union account he opened for you later that week. It’s a low point for responsibility when your own toddler has more savings than you. Any chance of a lo….etc.

That funny voice that cracks you up is his impeccable Godfather impersonation, complete with downward mouth and thick bottom lip. He does a brilliant Jimmy Savile and Rolf Harris, too, but those had to be shelved. Sometimes he forgets until he remembers and there’s a pause before we both move on without saying anything.

Every few weeks he scurries over to the shopping centre at lunch for a quick flick through the children’s clothing rails. Sorry you were made wear those psychedelic jeans.

That microscopic white patch on the back of his head is a souvenir from his exam days when he would unwittingly soothe his anxiety by rubbing the one little patch of hair until he wore it down. Wearing him down is my job now.

He still does this sometimes when he’s nervous, or watching his team in a tense game of football. They’re without a manager at the moment and he fell out of bed last night exuberantly cheering a penalty they saved in his dream. The same team he held a season ticket for before surrendering it to buy you weird psychedelic jeans and other stuff.

Failing his first driving test at 18 was the last time he cried until accompanying you to get a general anaesthetic last year. When I say cry, I mean welled up, which is outright bawling to the rest of us.

He disappeared minutes before the ceremony was due to start (leaving his sisters, your Aunties, to piss themselves at the family portrait) returning with a used envelope housing his big-hearted words of love and gratitude he quietly expressed to all.

Your Granddads lit candles with ginormous granddad-sized matches. Your Grannies spoke words of wisdom handed down from minds more poetic than ours. Your Auntie rocked the (good) living room. Your Fairy Godmothers pledged love and loyalty, and we all serenaded you with a spectacularly out-of-tune Catch a Falling Star. Not a door slammed, not a grudge resurrected. The power you have.

Your Dad was right about the song. It belongs to you and him alone. On your Sunday drives together over the border for cheap diesel when he can add harmonies at top tonsil and belt out the drums on the steering wheel. Here it is.

You have no idea how lucky you are. 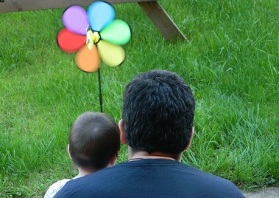 3 thoughts on “Rock me Daddy-O”