One of my favourite things about Castrophe was the pre/postcoital chat between Rob and Sharon. And my frequent inability to correctly spell Catastrophe. It all came out on the pillow. His tenderness, her insecurities. Their zig-zag spooning curled up around chat. The flipping over of fears from vertical to horizontal evening out the bunched up either downs or ups.

Why couple counselling isn’t conducted by travelling bed-side therapists is a glaring oversight. Why couples don’t just lie down while talking to one another is probably the reason for the proliferation of so many office-based ones.  And the small matter of it being impractical. And the likelihood of the bed-side box of tissues causing momentary awkwardness.

Which is just as well because, in my live u-turn you’re currently reading, I don’t think it’s one of my better proposals. I wouldn’t be able to discuss other critical issues inspired by sitting upright watching TV. People complain about TV being a conversation killer. How else would I have been able to ask my fella if he’d stick with me if I was quadraplegic after a horrific accident. Documentaries (and Eastenders) are handy for bluntly raising these delicate questions. I think that one might’ve been inspired by a man who was paraplegic, so I took it from there and added a few extras (“Even if you didn’t qualify for carer’s allowance?”).

So, bedtalk is best left to releasing whimsical internal dialogue. Only last night, as we lay there basking in the post-Chinese-take-away glow, I casually disclosed I’d convinced myself  I’m going to be given the heave-ho from work next week. For some vague reason (acute paranoia), based on nothing much (nothing much), I’ve reasoned it’s The End. Insert dramatic violin music here. With funding drying up, it’s the perfect opportunity for them to jettison the weak link in their otherwise perfectly well-dressed, if inherently dysfunctional, organisation. And no amount of soothing yawns from my fella convinced me otherwise. Nor could he offer any valid reason why I am trapped by my own perpetual expectation of other folk to expect me to take responsibility for their tattered, threadbare efforts.

Too bad paranoia and socially functioning madness are only acceptable in TV form. And even at that, not by everyone. “Meh”, was the general consensus among The Other Mothers to my stage one grief (comfort eating, bad hair) over the show’s finale. As if they haven’t already given me enough reasons to hate them (e.g. an unwillingness to swear when the children aren’t around, always remembering they have children). So I’m in for a few ropey days of holding it together until Tuesday when I’ve been summoned to meet the boss. Just as well we’ve a few distractions over the weekend.

This evening we have a christening. An event normally requiring rescue remedy and the super-gluing of the left corner of my lip to my teeth to prevent it from curling. It’ll be fine.

Priest: “Do you reject Satan, father of sin and prince of darkness?”

Loudly from the back pew..

“Possessor of grand ego, Godfather of ineptitude, Commander-in-Chief of his one man army.”

Stunned silence from those gathered.

“Oh, sorry. I thought you were talking about my boss”

Tomorrow, I’m on fake cheerleading duties at a charity run. Not content with doing an impersonation of Forrest Gump round town, my fella’s life is so empty he chooses to run in other places for free, enlisting the child to do likewise. I’ve been practising my proud face all week, which is not unlike my reaction to spotting unsolicited beetroot on my plate.

Race MC: “And lining up in the distance are members of Carlow Athletic Club. Always good to see them. Although, I’ve always doubted the existence of Carlow. Does it really exist? Has anyone ever actually been there? OK, we’ve three minutes to go before the race gets under…”

MC elbowed aside by dishevelled woman who looks like someone just served her beetroot. She grabs the mic.

“I’d like to give a supa shout-out to Sha Nade O’Connah, rawking it live NON stop. You are tha best Sha Nade, word up.  Sorry, I’ve always wanted to that. But, really, I want you all to give it up for my man, Forest, and our wee one, eh, Forrestine. Without you, I’d be at home watching re-runs of Come Dine With Me. And if it all goes to shit on Tuesday, well so what? You’ll both still love me, right? Even if I don’t qualify for Umployment Assistance?” 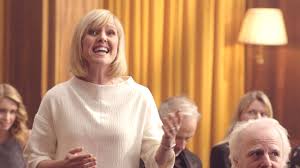 “Purveyor of stupid fucking jokes in the staffroom…”

So long as I don’t pull a Fran.

Take it away there, MC Lyte like a good man…