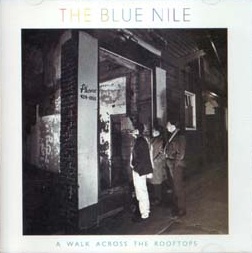 A Walk Across The Rooftops – The Blue Nile

The title track came hurtling through an old fashioned one-piece earphone attached to my Da’s wee transistor radio I used to sneak to bed for Mark Cagney’s Nightrain. Showing me vintage there. The radio was later confiscated by my Irish teacher when she discovered I was using it as a life-support machine in her class. Was just stepping into my teens and devouring all the music I could get me ears on. Cut to our school tour months later…Golden Discs on Middle Abbey St. (RIP). A Cure album in one paw, The Blue Nile in the other, just enough dabs for one. Plonked the former back on the shelf and a lifetime’s soundtrack was born. Paul Buchanan was designed by nervous angels with a caffeine habit and a fondness for getting their harps out in the dead of night.

Hatful of Hollow – The Smiths

1985. Electricity has recently arrived. Wow. Motor cars, battery powered sheep, and now electric carving knives men can buy as presents for their wives at Christmas. People are euphoric, wild with excitement. Meanwhile, in my brother’s bedroom I delicately place a two-pence coin on the record player needle to help its journey over that scratch in the middle of the first line after Johnny Marr’s clinker of a lead-in. “Punc…tured-punc…tured-punc…tured”. Rarely works. Always needs slight pressure from the index finger to get it past check-in. Too much pressure and it’s fucked. “Punc-tured (holds breath).. bicycle on a hillside desolate”. And we’re off (checks naff hairdo in mirror)

The Lion & the Cobra – Sinead O’Connor

I remember it, Dublin in a rainstorm. Sitting in the long grass in summer, thinking we were cool freezing our balls off. We were so young then I thought that everything we could possibly do was right. I know different now.

London by night. A room in a house in a street in a city where the neons stay lit longer than the dreams of most dreamers washed up there. The re-grouping is complete; time to return and find the one willing to waltz around to Little Trip to Heaven. Any old kitchen’ll do.

I think you’ll like this, she says, handing over a copy to him, correct ink pen used to delicately write the track-list. One misfit chaperoned two others home through an album of sonic anxiety played out through four speakers crisscrossing the country in opposite directions. Was it the second meeting or third? The album sounds like 1:30am behind the wheel on the open road, getting blinded by the headlights of your on-coming thoughts and the realisation of what might be. They share a tiny kitchen with enough space for bad dancing.

15 thoughts on “Top 5… soundtracks of our lives Part One”