Life, like Tom Cruise, can be very weird. I robbed that line outright from Panti’s set at Body & Soul last weekend. A half hour retrospective sizzling with one-liners and insights as she pieced together the bizarre experience of finding herself a national treasure in recent months. Other highlights included generous helpings of falafel, general good cheer, unidentifiable music powerful enough to get the most stubborn of feet shuffling, and a previously unheard but cracking laid-out on Sunday festival lawn cover of Neil Young’s Harvest Moon, which you can listen to here.

There comes a moment in every aging festival goer’s career when one can no longer put off the inevitable. When it’s time to pause, reflect on happy times, reconcile then with now, adopt some perspective, and finally trade in the sleeping-room-only tent for one with ample standing room. Preferably chosen with the aid of a little video on a website that shows off the interior while the prospective buyers lean in to marvel at its impressive orthopaedic friendly features. We could well have given birth to the average festival weekender by the overbearing youthfulness of them, but by Jesus we’re able to maintain a comfortable up-right position as we lament not investing in some reputable ear-plugs to drown the fockers out.

Which is exactly what our camping neighbours were thinking when they registered our Nordie riff raff status and barely suppressed their furtive glances checking for evidence of our exact position in the lowly caste. “Oh, Honey, where did you put the Buckfast?” Ha, had you there (I thought to myself). By Sunday we were on fake smile terms as our one cheerfully played with little Deloitte, Touche, Morgan and Stanley. Such adorable children. They didn’t even make fun of her when she helpfully pointed out their football was broken. She enjoys the occasional rugby tackle but her experience of them to date is confined to rigorous tickling sessions with her Da on the living room floor.

For all the unlikely bedfellows family friendly festivals peg together, children rise to the challenge without a bother, gabbling away in their native tongue of life in the moment; the elusive moment the pair of us strain to reach through the tent that doubles as a tardis on another return journey we’re not convinced is going to land safely.

Review: Plenty of standing room so no more muscle pulling while entering and leaving. Plus and an abundance of storage pockets. Even the lip balm can have its own storage.

Drifting from stage to food stall, and from bar to ice-cream van, we managed to get within reasonable distance of The Moment. Not quite front row, but close enough to make out its features. To see the self-consciousness of its inhabitants dissolving away, its out-stretched arm offering a non-discriminatory hand to whoever fancied crossing its threshold. The promise of no-strings-attached escapism however meaningless. And meaningless is just as meaningful as life-altering experiences man, that more experienced travellers manage to reach usually with something stronger than warm beer and generous helpings of falafel.

We managed to catch most of the Moment from sitting on the shoulders of a one-child army, victorious on her hunt for every available opportunity for fun. It transpires that living in the moment also means not having to worry about needing the balls or your own two-to-four feet folk to join in. Just hook up with the others already there. 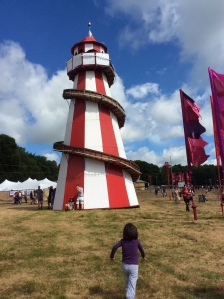 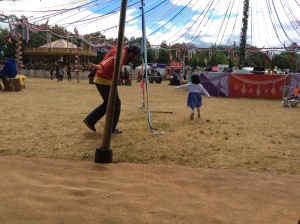 “Wait a minute, where’s me jumpah?”