Even the restaurant staff seemed to be in on it. No sooner had the pair of waiters strutted off in their confirmation trousers when our eyeballs collided over a bowl of onion rings. One of his brows elevated in sympathy with certainty they’d forgotten my order; the other furrowed in mild panic he might have to share them with me.

So I did what any considerate partner would do in the circumstances: robbed our little one’s chips when she wasn’t looking, and pretended to be nonchalant about the mishap until we collared a passing waiter. Quick on the heels of a fulsome apology came the insistence I accept a few fancy beers on the house. In time honoured tradition of poker-faced comparison of orders, we both conceded I had won. A rare victory for the persona non grata on this maiden voyage.

Relegation took effect on the plane where I was condemned to three rows behind. I spent the flight straining to hear what the conspiratorial chuckling was about as they downed a bag of Haribos between them. Not so much as the offer of a fried egg insincerely made over their shoulder.

On landing, my stroller-rolling skills were deemed inferior by its passenger, so a quick pit-stop in arrivals elevated her Da to the driving seat. I shuffled behind, struggling to keep pace along with the bag, the coats, and the just-in-case blankets. And the two books and twice as many papers in case we had to huff about something, or sit through relentless teletexting for the latest results. If the hotel had teletext. Always a tense moment. “That remote is for the radio”. Ah, his mystified look; one of my personal favourites.

So much for the extravagantly sized bed and the neighbouring mattress that passed her battery of bouncing tests. By 2am, she was the horizontal to my vertical, until I was displaced by irredentist toes and exiled to her bed while their snores chittered on enthusiastically.

In Hamley’s, their giggles pervaded the shop like a sonar signalling their whereabouts. Fearful she had located the Barbie aisle, I was relieved to find them talking to a plastic fish doing endless laps of an over-sized bowl, momentarily pausing the rhythm of their laughter to explain the joke in a manner that implied I really needed to have been there.

They really needed to have been there to fully appreciate the spectacle of me getting stuck in the turnstile with my bag as we entered the grounds the following day. Having skipped on through the roar of the crowd in the opening minutes of the game, they missed out on the ignominy of me having to be rescued by a security official. Purposeful skipping that had no time for time-wasters unaccustomed to the ways of the modern day gladiatorial pit.

Who could blame him? He’d been planning this day since before she was born when he smuggled in a new-born babygro from the official merchandise. It was official. In exchange for sparing her conscription to Catholicism, he’d recruited her to a more militant faith with its own band of over-zealous followers scarf-deep in suspicion over referee decisions and ball positions.

Beside them I sat, watching a grown man being reduced to a toddler barely older than the one he held aloft as the first goal went in. The one he danced with as the second sailed past them towards the back of the net. The one he plonked in between himself and the goal-scorer as he beamed down the lens of the camera I was ordered to point at them. The one who has been talking non-stop all week about their return visit.

“Maybe you could go to the cinema instead”. 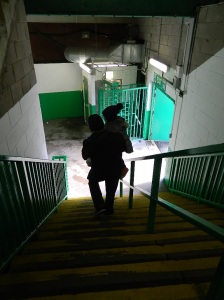 Match of the day