There comes a moment in every employee’s life when panic strikes fear in to the most indifferent of hearts. Or the other way about. Fear, panic. Either works. No, not sending an email slagging off the boss to the very boss. Close. That’s right, you’ve guessed it. I’m talking about when one is required to Sign The Card. Oh fuck no. Not The Card. Yeah. The Card.

Hardly a week goes by but someone I half know/tolerate has had a new baby, celebrating their leaving, or being congratulated for going off sick. Occasionally, someone will have had a bereavement, which, while sad, is also the terrifying moment when you realise exclamation marks can’t be relied on as a substitute for an actual message. Even if that sentiment is “thank Christ you’re leaving”.

Here are the six universal steps to signing the office circulated card as observed over some painful years:

1. Ignore the card/Wait until everyone else signs it first.

2. Find the least eye-drawing spot remaining; usually one of the bottom-hand corners, or in between two loud messages with enough room your own barely decipherable font size 5.

3. Quickly skim over what others have written while straining to conceal the fact you’re doing this. (See number 4) Curl your lip at what a lick arse/dull/unfunny person such and such is. (optional) Admire the blokes for their uniformly succinct no-nonsense ‘Best wishes, Dave’, even when their name isn’t Dave. (also optional)

4. Attack the card with the nib of your ball-point in a confident manner that suggests you don’t have to think about what to say, the perfect witticism just rolls off your pen.

5. Try to avoid staring into the middle distance for too long with the pen between your teeth in a bid to come up with a witticism that just won’t roll off your pen. No-one likes a lick-arse, or a thoughtful, decent person. Where I work anyway.

6. Five minutes later, just write a variation of all the other bland wishes already down only with extra exclamation marks attached. (Welcome to the sleepless world of parenting!!! etc.)

It’s creepy using codified language for “you lucky bastard” right below the boss’s insincere request for the person leaving to keep in touch but it has to be done. If you’re feeling brave, you could draw an arrow up towards the boss’s comment and spray a lot of LOLs around the place. Be careful to avoid committing absent-minded faux pas such as wishing the person happy birthday on a sympathy card, or sorry you’re leaving on a get well card. (guilty on both counts).

Beware the get well cards. Always check its source. In one job, a particularly heartfelt card was circulated around the office with alarming eagerness by the boss. The intended recipient was on sick leave due to being bullied by said boss. So I shoved it behind the radiator and it remained one of the great unsolved mysteries, and an agenda item at the next staff meeting.

Finally, approach the leaving card with caution. A few of my former colleagues and I took the time to make a leaving card for a soon-to-be former colleague. The woman cheerfully accepted the gesture only to fix me with an evil eye twenty gin and tonics later to point out that the boat had both a sail and an engine, which was obviously indicative of our desire to make sure she left. 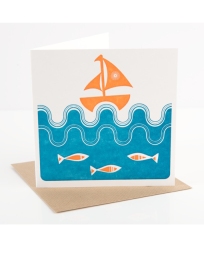 9 thoughts on “Sorry you’re having a birthday”