I was pottering around earlier… No, wait, that line was done before. Let’s start again. I was skulking (that’s more like it) around my office today, straining to maintain indifference to the efficiency on display from my colleagues. The kind of multi-tasking that’s precipitated by lengthy arse-scratching; that precedes a mass exodus. The sickening type of conscientiousness used to flirt with interview panels combined with a frenzy of Holy Thursday intensity.

Ordinarily, I’d have legged it out of here five years ago by now, but since I can’t simultaneously make a phone-call, email, and doddle a drawing of the person I’m talking to on the phone in an unflattering position, I won’t be going anywhere till August. Which is a pity because I like nothing better than leaving a stress pit to migrate West to roar obscenities at Lucinda Creighton on the box (this time last year).

Emotions and blood pressure remain consistent with July 2013 levels however, as I’m nearing the end of the second series of Borgen. Nyborg v Creighton. There’s a debate I’d pay Vincent Browne to chair. Top five ways Birgitte would slaughter St. Lucinda. That’s another post. Fuck it, I might just do that after this one. My blog ‘n’ all.

Meanwhile, back in the daily dungeon, I’ll be fantasising as I gaze out the window at the fresh Ulster flag flapping in front of my face. Another year, another head bowed in disappointment. Not at the politicians, or the community leaders, or the manufacturers of Daz washing powder that keeps them sparkling, or the cherry-picker vans that run them up the poles, or the sun that shines down on the spectacle, although that in particular upsets me greatly.

No. I recline, and wonder to myself… where are the bloody artists? The subversive thought ticklers? The culture terrorists?

I’ve calculated there are at least 4 hours of darkness per night during which the guardians of the flegs are tucked up in their wee beds. This gives sufficient time to strike a la the characters in The Educkators who re-adjusted the furniture of the rich to spook them out of their complacency; the erection of  police ‘Information Wanted’ signs around London, only the incidents included “two people hugging” and “someone seen smiling at 2:05pm”; or the landscape gardeners that produced glorious flowerbeds on urban roundabouts and desolated grounds overnight to the joy and bemusement of passers-by the following day.

Where is Banksy when ya need him? Let me guess. In a caravan in Bundoran? 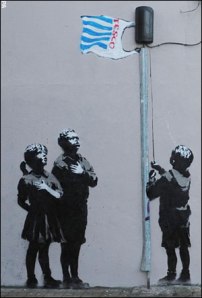 8 thoughts on “Hoist a new flag”